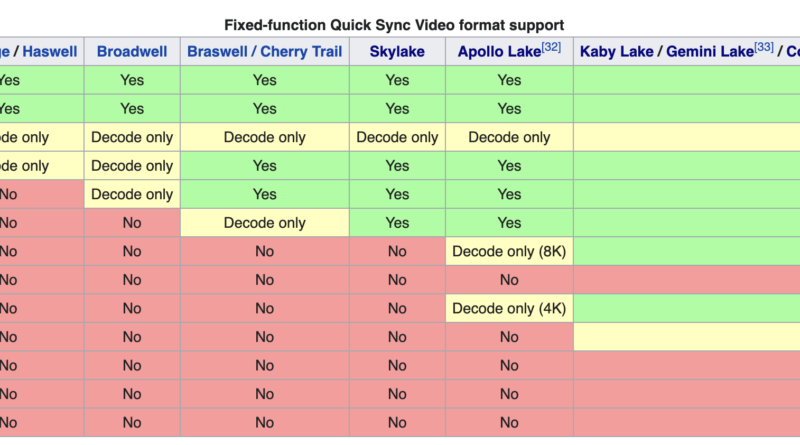 Hardware-accelerated encoding and decoding have come a long way. Since the release of 7th generation Intel processors, the onboard GPU & QuickSync technology is now fiercely in competition with Nvidia (NVENC) GPU en/decoding. QuickSync-equipped Intel’s are bountiful, easy to get and can be found in low-power, cheap setups. This makes it super interesting to create a mostly-for-transcoding small-form computer.

The cost to use a QuickSync-enabled CPU rather than a video card is an excellent ROI. In our tests, we found our video cards added 30w+ to our machines at idle and could skyrocket during load. The reality is, using video cards for media transcoding in small volumes doesn’t make sense. We define small volume as less than 15 to 20 simultaneous transcoded streams & direct streams.

Whether you make it a Plex Server, a Tdarr box, or something else(Blue Iris), we’ve got a list of suitable machines that you can then install Ubuntu on and get up and running. We mostly use Plex and Tdarr and so we will focus on boxes that benefit those use-cases.

Our recommendation is to stick with Kaby Lake and Coffee lake as they are the most cost-effective and give you the highest assortment of options.

There are many great boxes out there. And surely you can build your own. But we’re collecting some “good suggestions” below as price comparisons. Some of these boxes are versatile w/ PCIe expansion slots, handy to one day repurpose a machine into a pfsense box or add 10g cards, etc. One of the most interesting pickups is the laptop; they usually come with sufficient ram, SSD storage, have a built-in monitor and don’t require a dummy plug, and have their own built-in UPS. Due to the changing nature of these deals, we won’t update this table; monitor our #teach-deals channel on Discord for live deal flow.

In some of the boxes listed above, you’ll want to upgrade RAM or Storage. Each box has different requirements based on your needs and, more importantly, varying compatibilities. Some boxes support an NVMe drive while others support only SATA. Please check for compatibility before purchasing anything; if you need help, just ask!

QuickSync activates when a monitor is plugged into the machine. To fake that, so you can run your QuickSync Box headless, pick up the appropriate dummy plug. These should not be necessary if you go with a laptop.

You can find dummy plug recommendations in our parts suggestions section.