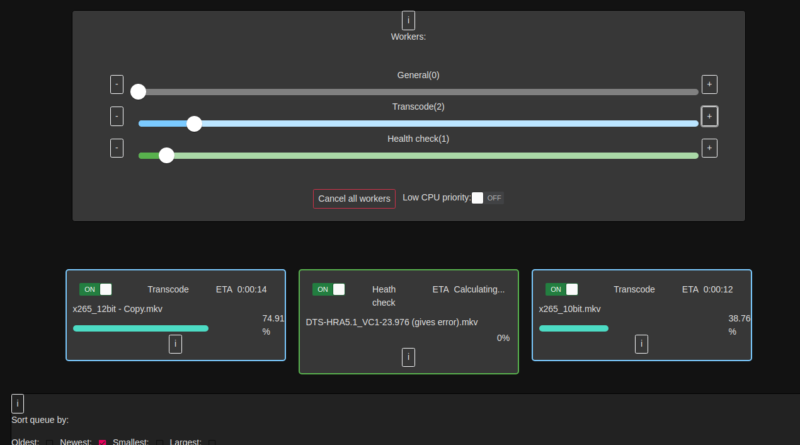 With large adoption of the HEVC (x.265/H.265) codec, converting from H.264/VC-1 is becoming more and more appealing. Transcoding, on the fly, from H.264, H.265, and VC-1 can be done efficiently be accomplished in its entirety with QuickSync. It allows for a dozen+ streams, all transcoding, on a small computer worth a few hundred dollars and costing significantly less a computer and video card/GPU build. Some of the benefits of encoding in H.265:

Tdarr is a self hosted web-app used to automate media library management allowing you to make sure that your files are meet your specific needs in relation to codecs/streams/containers etc. It works in conjunction with Sonarr/Radarr with a core designed to be both customizable and scalable. You are able to set on a per library basis transcode settings, filters and schedule. Workers consist of three types including ‘general’, ‘transcode’, or ‘health check’.

Tdarr not only allows you to transcode files from and into multiple formats, but also allows:

Intel QuickSync Video is Intel’s brand for its dedicated video encoding and decoding hardware core. The name “QuickSync” refers to the use case of quickly transcoding (“converting”) a video from, for example, a DVD or Blu-ray Disc to a format appropriate to, for example, a smartphone. This becomes critically important in situations where source material may available in any number of video formats, all of which must be brought into a common format (commonly H.264/H.265) for inter-cutting.

Unlike video encoding on a CPU or a general-purpose GPU, Quick Sync is a dedicated hardware core on the processor die. This allows for much more power efficient video processing.

Further, hardware-accelerated en/decoding has come a long way. Since the release of 7th generation Intel processors, the onboard GPU & Quick Sync technology is now fierce competition with Nvidia (NVENC) GPU en/decoding. QuickSync-equipped Intel’s are bountiful, easy to get and can be found in low-power, cheap setups. This makes it super interesting to create a mostly-for-transcoding small-form computer.

The cost to use a QuickSync-enabled CPU rather than a video card is an excellent ROI. In our tests, we found our video cards added 30w+ to our machines at idle and could skyrocket during load. The reality is, using video cards for media transcoding in small volumes doesn’t make sense. We define small volume as less than 15 to 20 simultaneous transcoded streams & direct streams.

Whether you make it a Plex Server(guide-link), a Tdarr(guide-link) box, or something else(blue iris), we’ve got a list of suitable machines that you can then install Ubuntu on and get up and running. We mostly use Plex and Tdarr and so we will focus on boxes that benefit those use-cases.

This guide assumes you will be setting up Tdarr on a never before used system.

Before installing Ubuntu You will need to create bootable media:

Now that we have Ubuntu installed and ready to role we need to open a terminal and set our sudo privileges on the host. Let set it for the entirety of this session using the following command:

and now lets makes sure we have all of the latest and greatest information in our local database of software:

In the terminal window type:

​ Allow the operation to complete

and now lets upgrade our packages

​ Allow the operation to complete

AutoFS will allow us to mount network drives (via NFS) to look like local drives, and have them auto reconnect on disconnect. This will be needed when it is time to set up and access your libraries in Tdarr.

For our purposes we will be installing Tdarr as a docker instance. To do so we will need to first install docker within our Ubuntu environment.

Portainer is an open-source management interface for Docker. It makes docker management easier by allowing you to manage containers, images, networks, and volumes from a web-based dashboard. For our purposes we will install Portainer as a docker.

Now we will run Portainer

8, You have now entered the Admin Dashboard for Portainer. Click on the tile labeled local

You are now ready to install dockers. Whether you install a Docker in command line or within Portainer it will register in Portainer!

Details on alternative methods can be found here: Tdarr Wiki